Schloss Enzesfeldt is a prominent landmark in the Triesting valley, about 25 miles from Vienna. The castle was developed as a fortress in the late 11th century to defend the valley from invading Slavs and Magyars. It came under the control of the Habsburgs, who sold the castle in the 16th century. After a variety of owners, the estate was purchased in 1880 by Salomon Albert Anselm von Rothschild (1844-1911), who restored the castle and improved the property, and was a great benefactor to the town of Enzesfeldt. The estate passed to Eugène von Rothschild (1884-1976), and between the wars the Viennese Rothschild family entertained on a grand scale at Enzesfeldt.

Enzesfeldt and the Duke and Duchess of Windsor

Eugène's first wife Cathleen 'Kitty' Wolf (1885-1946), had been a friend of Elsie de Wolfe (Lady Mendl), and in 1937, it was on her recommendation that the Rothschilds invited the Duke of Windsor to stay when he left England, having signed the Instrument of Abdication on 10 December 1936. It was to prove a difficult three-month visit: the Duke was a demanding guest, and he had to remain apart from Wallis Simpson until there was no danger of compromising the granting of a decree absolute in her divorce proceedings. The couple were reunited at the Château de Candé, Monts, France, in May 1937, where they were married a month later.

During the Second World War, properties of the Viennese Rothschilds, including Enzesfeldt were confiscated by the Nazis. The Viennese business of the Rothschilds was seized, and Eugène and other members of the family had to pay a substantial ransom for the release of his brother Louis von Rothschild (1882-1955) from imprisonment by the Gestapo in Vienna. Eugène and Kitty left for the United States, where they settled on Long Island, and where Eugène, met and married his second wife, the former actrees Jeanne Stuart (1908-2003) in 1952, after Kitty's death in 1946.

In 1963, Eugène sold the Enzesfeldt estate, and it was subsequently developed into a country club by Baron Hubert von Pantz. 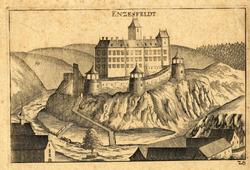