With the purchase of a hôtel in 1818 in the old rue d’Artois, now rue Laffitte, the richest, most animated and modern part of Paris, James de Rothschild’s lifestyle began to reflect the high social position he had attained.

James did not reconstruct the house until 1836, but when he did it was with lavish results.  Lionel wrote to his fiancée Charlotte with obvious approval of the alterations there:  ‘The ground floors will be finished by the end of the month and will rival any palace[...]The first floor, the daily habitation is nearly as splendid, so much gold that for the first few days one is quite dazzled’.

With its seven gilded salons and luxurious curtains, some of which hung in double and triple thicknesses, the house aroused general admiration.  The poet Heine described it as ‘the Versailles of a financial potentate’.  It was the perfect setting for the many soirées James held there each week.  As many as sixty guests regularly sat down to dinner, among whom were numerous figures from the artistic community, such as Balzac and Heine, Liszt, Puccini, Meyerbeer and the music publisher, Maurice Schlesinger, while Rossini wrote music for his parties and Ingres painted a portrait of Betty there.

The house was the home of the Banque Rothschild until it was demolished in 1967. 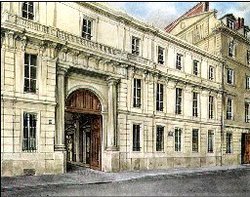