Although known as the business address of the London house of Rothschild for over 200 years, Nathan Mayer Rothschild (1777-1836), initially took the New Court premises as a home for his family and a base from which to build his business.

Nathan had left the family home in Frankfurt in 1798, moving to Manchester, where he founded Rothschild Brothers, a branch of his father's merchant house in Frankfurt. Nathan moved to London 1808, after the death of his father-in-law, the wealthy London merchant Levi Barent Cohen, and it was clearly his intention to establish himself as a banker.

The “lane called Swityhinnes” was first recognised in about 1270. In 1666, the Great Fire of London destroyed most of the properties in the lane. The first mention of a house called ‘New Court’ appears in John Strype’s Survey of London in 1720. In 1734 the lane was described as “a very handsome large place, with an open passage into it for a coach or cart. Here are very good buildings and at the upper end is a very good large house inclosed [sic] from the rest by a handsome pale”.

In 1809, Nathan acquired the lease of No.2, New Court for £750, as a home for his family and as the centre of his London business interests. The property had an attached warehouse so Nathan could continue his business as a merchant; and was short stroll away from the bank of England and the Royal Exchange where Nathan would soon make his mark.

There have been four buildings called New Court on the site; please see The History of New Court for more information. 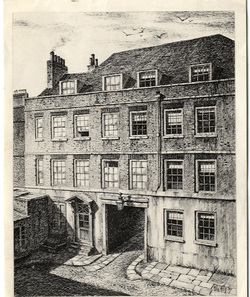