The oldest historical record of a building at the location of the current castle dates to 1391. In that year, the family De Haar received the castle and the surrounding lands as fiefdom from Hendrik van Woerden. The castle remained in the ownership of the De Haar family until 1440, when the last male heir died. The castle then passed to the Van Zuylen family. After 1641, when Johan van Zuylen van der Haar died childless, the castle gradually fell into ruins. In 1801, the last Catholic van Zuylen in the Netherlands, the bachelor Anton-Martinus van Zuylen van Nijevelt (1708-1801), bequeathed the property to his cousin Jean-Jacques van Zuylen van Nyevelt (1752-1846) of the Catholic branch in the Southern Netherlands. In 1890, De Haar was inherited by Jean-Jacques'grandson Etienne Gustave Frédéric Baron van Zuylen van Nyevelt van de Haar (1860-1934), who had married Baroness Hélène de Rothschild (1863-1947) in 1887.

Together with Hélène, Baron Etienne contracted architect Pierre Cuypers in 1892 to rebuild the ruined castle, a project which took 20 years. The castle has 200 rooms and 30 bathrooms. For the interior Cuypers made extensive use of cast iron and richly ornamental wood-carving, and the castle was equipped by Cuypers with the most modern gadgets, such as electric lighting with its own generator, and central heating by way of steam. For the period, the kitchen was very modern with an enormous furnace, 6 metres long. The tiles in the kitchen were decorated with the coats of arms of the families De Haar and Van Zuylen. Cuypers even designed the tableware. The interior of the castle was furnished with many works from the Rothschild collections, including porcelain from Japan and China, Flemish tapestries and old master paintings.

Surrounding the castle is a park, designed by Hendrik Copijn, for which Van Zuylen ordered 7000 fully grown trees. The park contains many waterworks and a formal garden modelled after the gardens of Versailles. To create the park, the village of Haarzuilens was demolished, with the exception of the town church. The inhabitants were moved to a site a kilometre further up the valley, where a new Haarzuilens arose, built in a pseudo-medieval style, including a rural village green. The buildings were for the most part designed by Cuypers and his son Joseph Cuypers.

In 2000, the Van Zuylen van Nyevelt family passed ownership of the castle and the gardens to the Foundation Kasteel de Haar. However, the family retained the right to spend one month per year in the castle. In the same year, the Dutch society Natuurmonumenten bought the surrounding estate of 400 ha. An extensive restoration programme of the castle and the gardens was begun in 2001 and completed in 2011. After the death in 2011 of the last van Zuylen male heir, his daughters sold the complete art collection and interior furnishings of the castle to the Foundation Kasteel de Haar. 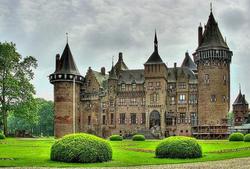