It was built from the 1840s onwards, on part of the grounds of Kensington Palace and the freehold still belongs to the Crown Estate. The palace, which is the residence of the Duke and Duchess of Cambridge, Duke and Duchess of Kent, the Duke and Duchess of Gloucester and Prince and Princess Michael of Kent, fronts the southern part of the street on the eastern side. The houses at the northern end are mostly Italianate, while those at the southern end are mostly in the Queen Anne style. The road was originally called The Queen's Road and was renamed Kensington Palace Gardens around 1870 when plane trees were planted in the avenue.

Lionel de Rothschild (1882-1942) moved into 18, Kensington Palace Gardens, c.1912. He renovated and remodelled the property, which had formerly been occupied by Lord Lee of Fareham, giving orders that the Victorian style of the property 'should not be interfered with by the improvements'. He did however, install the oak panelling from his ballroom in Park Street. An electric lift was fitted, together with a luxurious winter garden and garages. The Daily express estimated that the total cost of the alterations was between £20-30,000.

The property later became the Egyptian Embassy, and its neighbour, No.19 became the Russian Embassy. In the 1990s, the two properties were united into a single, private home by the academic and property developer David Khalili who spent four years and £20m joining the two addresses together before selling the property on to Formula One boss Bernie Ecclestone in 2001 for £50m. In 2004, Ecclestone sold it on, this time to Indian steel billionaire Lackshmi Mittal, for £57 million. 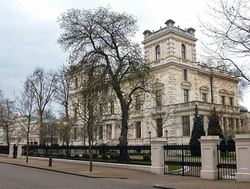