During the Second World War, Anthony offered the property for use by the War Department and there were plans for it to be used as an Officer’s Club.  These plans were not advanced however, as the property was badly damaged by bombing and was deemed unfit for habitation.

In the mid-1950s the ruined building was demolished and a block of flats was built on the site. 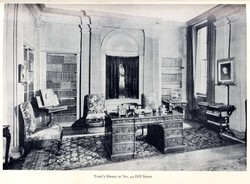