The original manor house on the moated site to the south of the village of Rushbrooke is believed to have been constructed in the reign of King John, and named after the local landowning Rushbrooke family. Between 1230 and 1703 the manor and estate was held by the Jermyn family. In the mid-16th century, the old manor house was replaced by a red brick, two storey, moated Tudor building at the centre of a large ornamental garden and a parkland estate. The manor house was laid out in an E-shaped plan, constructed around a courtyard.The entrance to the house was through an impressive central porch built of Barnack stone and decorated with armorial achievements. Major modernising alterations were made to the house in about 1735.

The estate remained in the Jermyn family until the early 18th century, when it passed by marriage to Sir Robert Davers, 2nd Baronet. From the Davers family, it passed to Frederick Hervey, 1st Marquess of Bristol, who sold the house to Robert Rushbrooke. In 1938 ownership of the manor was taken over by Victor Rothschild. In 1961 it was decided to demolish and rebuild the house; during the demolition, a fire devastated the building. Several of the remaining decorative features were used in St Edmund's Church, Bury St Edmunds. The moated site and some of the formal gardens are all that remain of the house.

In 1990, the property passed to Victor's son, the late Amschel Rothschild (1955-1996). Amschel continued to develop the estate and farm, growing fruit trees. When Amschel died in 1996, the property remained with the family. It was sold in 2015. 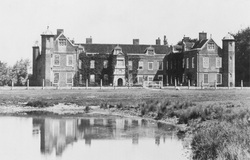