Palace Green is situated on the southwest slope of Campden Hill in northern Kensington. From Elizabethan times the area had a reputation as a healthy place to live, with spas and extensive market and nursery gardens. Its pleasant position and proximity to London made Kensington become  more popular and the area developed throughout the seventeenth century. Early in 1903 particulars of a scheme for letting the land were made public. The ground was divided into seven plots, which were to be let for the erection of private houses similar to the others in Kensington Palace Gardens. The elevations were to be "of handsome architectural design, and executed in Portland stone, fine red brick or terra cotta or other material not inferior thereto, to be approved by the Commissioners", and each house was to consist of not more than three main storeys besides a basement and an attic, with an overall height restriction of forty five feet. Tenders were invited for the leases, and £1,380.00 was offered by William Willett of Chelsea. Willett made the three southernmost plots available to Holloway Brothers, who built Nos. 4, 5 and 6. The architects for No. 4 Palace Green were Read and MacDonald, and the house was built between 1904-1905.

The house remains part of the Crown Estate, and today the property is occupied by the Romanian embassy in London. 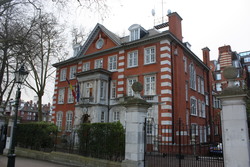