In 1975, Baron Guy de Rothschild (1909-2007) and his wife Baroness Marie-Hélène (1927-1996) purchased Hôtel Lambert, a grand townhouse, one of the most luxurious mansions in Paris on the Quai Anjou on the eastern tip of the Île Saint-Louis, in 4th arrondissement of Paris from the Czartoryski family who had puchased the Hôtel  in 1843.

The house, on an irregular site at the tip of the Île Saint-Louis in the heart of Paris, was designed by architect Louis Le Vau. The entrance gives onto the central square courtyard, around which the hôtel was built. It was built between 1640 and 1644, originally for the financier Jean-Baptiste Lambert (d. 1644) and later occupied by his younger brother Nicolas Lambert, president of the Chambre des Comptes. Nicolas Lambert commissioned Charles Le Brun, François Perrier, and Eustache Le Sueur, to decorate the interiors, producing one of the finest examples of mid-17th-century domestic architecture and decorative painting in France. After Le Vau’s death in 1670, his hôtel was bought by the La Haye family, who enlarged the property. In the 1740s, the Marquise du Châtelet and Voltaire, her lover, used the Hôtel Lambert as their Paris residence. The Marquis du Châtelet subsequently sold the Lambert to Claude Dupin and his wife Louise-Marie Dupin. In 1843, the Hôtel was bought by the Polish Prince Adam Jerzy Czartoryski, who established the building as an important centre for Polish exiles and political activities, promoting Polish culture. Among the notable guests and patrons of the Hôtel Lambert were some renowned artists and politicians of the age, including Frédéric Chopin, Zygmunt Krasiński, Alphonse de Lamartine, George Sand, Honoré de Balzac, Hector Berlioz, Franz Liszt, Eugène Delacroix, and Adam Mickiewicz. Chopin's "La Polonaise" was composed exclusively for the Polish ball held there every year.

Under the supervision of Marie-Hélène, the Rothschilds renovated the property taking up residence in the top floors, and enabling their great friend, the banker, aesthete and collector Baron Alexis de Redé (1922-2004) to retain the apartment in the property he had occupied for many years. Following the death of Marie-Hélène in in 1996 and Baron de Redé in 2004, Guy de Rothschild decidd to sell the residence. In 2007, His Highness Sheikh Hamad bin Abdullah Al Thani and his immediate family, members of the Qatari royal family purchased the Hôtel. After the purchase, a massive restoration campaign was launched and the entire building was extensively refurbished, restoring many original features, through a collaboration with the Historic Monuments Department of the French Ministry of Culture. 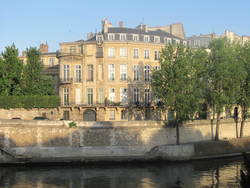