In the Lower Austrian region, the name of Rothschild is associated with prosperous and successful business and public social philanthropy. When Albert bought the Langau estate he was shocked by the damage done to the landscape by unfettered timber felling to meet the demands of Viennese builders. He set about reversing the situation, embarking on massive replanting and encouraging the return of the native plants and wildlife, setting a pattern which others were later to emulate. The Rothschilds built elegant hunting lodges in Langau.

During the Second World War, the estates in Lower Austria were confiscated. After the war, Bettina Looram (née von Rothschild) (1924-2012) accompanied her mother and uncle Louis to Vienna, to see what remained of their former property in Austria. The palaces were beyond repair, and the family sold them for virtually nothing. As to the alpine lands at Waidhofen, Göstling and Hollenstein, Louis gave them to the Austrian state, on condition that it used the proceeds to fund pensions for his former employees.

Clarice, kept Alphonse’s 30,000-acre estate at Langau, but because it was in the Russian zone she was unable to return there with her family until 1952. It was a happy decision, and in the mid-1970s Bettina and Matthew Looram retired there to live in a house that they built for themselves. Part of the estate remains owned by the family, and much of the area is set aside as a wilderness conservation area, as a tribute to the Viennese Rothschilds' ecological foresight. 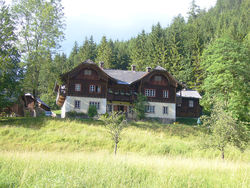