Château Clarke is a wine property of Bordeaux of 54 hectares (130 acres) based in the Listrac-Médoc AOC and classified as Cru Bourgeois. In the 12th century, the Cistercian monks of the Vertheuil Abbey established the first grapevine. The estate would permanently bear Tobie Clarke’s name in 1818, when the Irish family purchased the land.

In the early 1970s, Baron Edmond de Rothschild, who already held a stake in Château Lafite-Rothschild, decided he wanted to purchase another estate in the Médoc. Château Clarke has  a rich history and the Château was once widely admired for the quality of its red wines, as well as for its white wines, which is rare in the region. Production of the "Merle Blanc de Château Clarke" began around 1890.  Eager to restore the estate's legacy and wines, Edmond de Rothschild purchased Château Clarke in 1973.

Edmond de Rothschild chose to redesign the vineyard: the existing vines were completely uprooted and replanted. This time-consuming effort, which further delayed wine production, was a big risk. The process began in 1974 and was not completed until 1979. The acquisition of the estate was accompanied by a bold show of independence: the Baron decided to market Château Clarke wines outside the Bordeaux wine selling system. In 1998, Benjamin de Rothschild took the reins of Château Clarke from his father. He launched a new series of investments which included renovating the fermentation room and calling on the expertise of oenologist Michel Rolland. 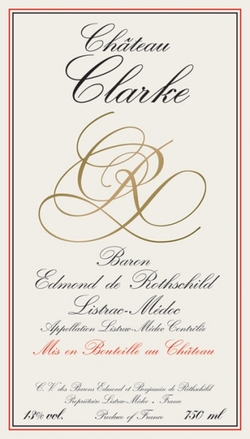