The first building of the Paris house in the rue Laffitte

James Mayer de Rothschild (1792-1868) was in Paris from the age of 19, co-ordinating the purchase of specie and bullion for his brother Nathan (1777-1836). Between 1814 and 1815 he was the lynchpin in Nathan’s plan to supply Wellington’s armies with funds. Originally trading as J M Rothschild, in 1817, James established a permanent business in Paris, under the corporate name of de Rothschild Frères with his brothers as partners. The business was housed in a mansion on the rue D’Artois which was later renamed rue Laffitte in honour of Louis Philippe’s minister.  James added the adjacent buildings so the offices occupied numbers 19, 21 and 23. By 1823 the Paris House was firmly established as banker to the French government. After the death of his brother Nathan in 1836, James took over the reins of the family firm and became the trusted adviser of ministers and kings. When James died in 1868, his sons Alphonse (1827-1905), Gustave (1829-1911) and Edmond (1845-1934), became partners in the bank, with Alphonse taking the leading role. After Alphonse' death in 1905, his son Edouard (1868-1949), took over the firm, followed by his son, Guy (1909-2007).

In 1940, under the Vichy regime, the Rothschild bank buildings in the rue Laffitte were occupied by the 'Secours national', who had its central administration in 21, rue Laffitte. The Secours national had originally been founded on the outbreak of war in 1914, on the initiative of Albert Kahn, to provide asistance to the military and their families. At the beginning the Second World War, the Secours National was reactivated by Government decree. Under a decree in May 1940, a credit facility of 50 million francs was allocated to the National Secours; a further decree of July 1940, allocated to the organisation the proceeds of the liquidation of the property of the Frenchmen who had been deprived of their nationality and Secours national became a powerful instrument of propaganda. In 1944, after the Liberation, it became 'Entr'aide Francaise' remaining in 21, rue Laffitte until 1949.

Between 1981-1982, Banque Rothschild, was one of 39 to be nationalised by the French government, and the Rothschilds were obliged to leave the rue Laffitte. 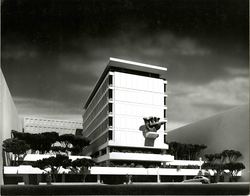