Build me a Mentmore, only bigger

James de Rothschild was so impressed with Mayer’s house at Mentmore that he is reputed to have told the architect Joseph Paxton, “Build me a Mentmore, only bigger”.

The design of Ferrières, Seine-et-Marne, which Paxton produced in 1859 was on the same lines as the English house, but on a much bigger scale with accommodation for one hundred servants and stables for 80 horses.  The kitchen was housed separately, and, in order that the food might arrive hot in the dining room, an underground railway conveyed it to the house.

Covering 4,000 hectares, the estate was large enough for a model farm to be maintained on it, and provided ideal territory for hunting.  Many distinguished guests visited during the shooting season, most notable among whom was Napoleon III who arrived on 17th of February 1862.  After planting a tree to commemorate his visit, he went shooting with James, returning in the evening to be entertained by the Paris Opera Chorus conducted by Gioacchino Rossini himself.

As ambassador to Paris, Bismarck  stayed at Ferrières on more than one occasion, enjoying his time at the château so much that he later persuaded his King to make it the Prussian headquarters when the Prussian invaded Paris in 1870.

Ferrières in the 20th century

The last of the family to own Ferrières was Baron Guy de Rothschild (1909-2007) and his wife Baroness Marie-Hélène (1927-1996). Seized by the Germans during the occupation of France in the Second World War, the château remained empty until 1959 when the newlywed Rothschilds decided to reopen it. Marie-Hélène took charge of refurbishing the huge château, making it a place where European nobility mingled with musicians, artists, fashion designers and Hollywood movie stars at grand soirées. Much talked about for the lavish and creative theme balls and charity fundraisers she organized both in Paris and New York, Marie-Hélène hosted regular parties at the château, mainly inviting aristocracy, but which also included her friends from a wider society such as Grace Kelly and Audrey Hepburn (with whom she was a close friend). Most famously the chateau hosted the Surrealist Ball on 12th December 1972. In 1975, Château de Ferrières was gifted to the chancellery of the universities of Paris by Guy and Marie-Hélène de Rothschild but they retained the home they had built in the woods surrounding the château. 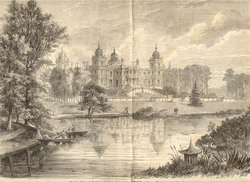