The area had strong Rothschild connections. The Rothschilds had owned property in Kent there since early in the nineteenth century, using it as a staging point for couriers and carrier pigeons for their communication with the Continent.

Shorncliffe Lodge was purchased after Edward's successful election in a by-election at Hythe, Kent, a constituency that had been represented by Mayer de Rothschild (1818-1874) from 1859 to 1874. It was sold c.1912 by Aline and Edward's son Philip Sassoon (1888-1939) to fund the purchase of land on which he built Port Lympne Mansion, Kent. 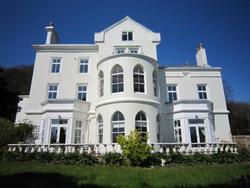