Champneys was originally a medieval estate near Wigginton, Hertfordshire. The estate comprises a large house built in the French Second Empire style set in landscaped grounds. The earliest record of an estate associated with the Champneys name is in 1307. It appears in the Tring manor court rolls for 1514. It was owned by successive landowning families in the Wigginton and surrounding area between the 14th and 19th centuries, although for a short period around 1535 it is recorded as owned by Thomas Cranmer, the then Archbishop of Canterbury. The grounds and original house were inherited in 1871 by the Rev. Arthur Sutton Valpy. He replaced the original building by the current French Second Empire styled house built in 1874 which stood in extensive grounds.

In 1900 Champneys was sold to Emma Louisa (née von Rothschild) (1844-1935), wife of Nathaniel Mayer, 1st Lord Rothschild (1840-1915), probably with the intention of its future use as a dower house. Lord Rothschild had owned the neighbouring estate of Tring Park since 1872, and the family divided their time between their London home at 148 Piccadilly and Tring Park. Lady Rothschild preferred to remain at Tring with her children (Lionel) Walter Rothschild (1868-1937), (Charlotte) Evelina (1873-1947) and Charles (1877-1923), throughout much of the year.

Walter became the second Lord Rothschild with the death of his father in 1915. Once it became evident that Walter would not marry, Lady Rothschild sold her dower house, Champneys and lived at Tring Park Mansion with her son. In 1925 Stanley Lief, (1890-1962) a pioneer in the field of Naturopathy purchased Champneys converting it into a Nature Cure resort which he ran from the 1930s for about 20 years. Champneys at Tring continued as a health resort until it was bought by the present owner, Stephen Purdew, in 2002, who established Champneys Health Spa there, building on the business developed by his parents in the 1970s. 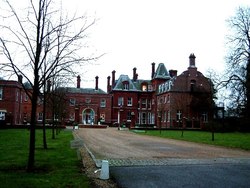