The Royaumont Abbey Palace is located in the north of the department of Val-d'Oise and in the commune of Asnières-sur-Oise.

History of the estate

An abbey was first founded at Royaumont in the 13th century. In 1781, Louis XVI’s chaplain, Henri Eléonore Le Cornut de Balivière, was appointed Abbot of Royaumont. He decided to build an Abbey Palace. The architect, chosen to build the Abbey was the royal engineer, Louis Le Masson, a student of Claude Nicolas Ledoux and professor of architecture to the Royal Court. King Louis XVI of France had allowed him a stay of studies in Italy between 1778 and 1781, where he studied the villas designed by Andrea Palladio, to which The Royaumont Abbey Palace makes numerous references.

The main building is a large Florentine-style pavilion adorned with a porch on three of its facades, allowing multiple views of the park as far as Viarmes, Luzarches and Beaumont-sur-Oise. The ground floor was reserved for the service staff, and contained the kitchen and rooms that were later transformed into a library. Access to the Palace itself was on the first floor. The first floor was organised around a central vestibule oriented east-west, ending on a staircase which started on the ground floor and went up to the second floor. On two sides of the vestibule, to the north and south, were two large reception rooms framed by smaller ones. The second floor followed an identical plan. The third floor housed the servants' rooms and was accessible only by the service staircase.

The structural work was completed in 1787 , after only three years of work. The interior, decorated with great refinement by its architect, however remained unfinished and uninhabitable when the abbot of Ballivieres emigrated in 1790. During the Revolution, the whole of the estate was confiscated before being sold to Joseph Bourguet de Guilhem. In 1792, the abbey was destroyed; later, the buildings connecting the abbey to the Palace were demolished.

It was only after 1815 that the new owner of Royaumont, Joseph Van der Mersch, made the Palace habitable for the first time. It became a centre of worldly and intellectual life under the Restoration. When Van der Mersch experienced financial difficulties, he sold the Palace to the Marquis Jacques-Henri-Gabriel de Bellissen. The next owner was Louis-Roch-François Pitat, a broker at the Paris Stock Exchange. He made some renovations and decorated the walls with bas-reliefs depicting industry, navy and commerce. In March 1899, Jules Goüin bought the Palace, acquiring the Abbey in 1905.

The Fould Springers and the Rothschilds

The Palace was bought by Baron Eugene Fould (1876-1929) and the Austrian Baroness Marie-Cécile von Springer (1886-1978) from the Goüin family in 1923. They undertook a substantial restoration of the property, even restoring the ornamental ponds to their original state. They selected Neoclassical works of art to decorate the Abbey Palace, in harmony with both the setting and architecture. The result reflected the stately French taste of the period. Baron and Baroness Fould-Springer and their children Max (1906-1999), Hélène ('Bubbles') (1907-1997), Therese ('Poppy') (1908-1953) and Liliane (1916-2003) divided their time between their Paris, Austrian and Hungarian residences and the Abbey Palace where they held parties. Royaumont survived the ravages of war largely through the interventions of Hélène and her husband, the Spanish diplomat Don Eduardo Propper de Callejon, who was appointed First Secretary at the Spanish Embassy in Vichy, capital of the Unoccupied Zone of France, in 1940.

Liliane Fould-Springer married Elie de Rothschild (1917-2007) in 1942. The marriage took place by proxy, since Baron Elie was at the time a PoW at Colditz Castle, from where he had written to Liliane with his proposal. Liliane's mother was uneasy about her daughter taking the name Rothschild at such a dangerous time, but the marriage went ahead. Baron Elie gave his pledge at Colditz on October 7 1941; Liliane gave hers at Cannes Town Hall on April 7 1942, with a photograph of the groom on the table in front of her and an empty chair at her side.

After the Second World War Baroness Marie-Cécile Fould-Springer and her son, Max, spent weekends and the summer at Royaumont, together with Liliane and Elie, but by the late 1980s, Royaumont was only occasionally inhabited. The Palace eventually passed to Nathaniel de Rothschild (b.1946). In 2011, Nathaniel (who resides in the United States), decided to develop the Palace into luxury conference and seminar venue. 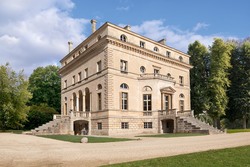