History of the property

The Hôtel de Masseran is a private mansion built by architect Alexandre-Théodore Brongniart. It is located at 11 rue Masseran, in the 7th arrondissement of Paris. Together with the Hôtel de Montesquiou, rue Monsieur, and the Maison Brongniart, at the corner of the Boulevard des Invalides and the Rue Oudinot, it is one of the many buildings constructed by Alexandre-Théodore Brongniart in the Invalides district at the end of the reign of Louis XVI.

The Hôtel was built in 1787 for Carlo Sebastiano Ferrero Fieschi (1760-1826), Prince Masserano, who gave it its name. A member of the illustrious Genoese family of Fieschi, son of Vittorio Filippo Ferrero Fieschi (1713-1777), Prince Masserano, and Princess Charlotte Louise de Rohan (1722-1786) daughter of the Duke of Montbazon, he had married in 1776 Adelaide Augustine Joachime de Bethune (1756-1790), granddaughter of the wealthy financier Louis Antoine Crozat. On the maternal side, the Prince was descended from Charles-Emmanuel II of Savoy and was also cousin of King Louis XVI .

In 1836, the Hôtel was acquired by a Parisian banker of Belgian origin, Louis François-Xavier De Clercq.  A large Louis XVI style lounge was created in the second half of the 19th century, and for many years this was considered as an original creation by Brongniart. De Clercq died in 1838. His wife, née Henriette Crombez-Lefebvre, rarely visited the rue Masseran, preferring their country residence of Oignies. After the death of Madame de Clercq in 1878 , the Hôtel  passed to her daughter, Berthe Aline Françoise Marie, Countess of Boisgelin by her marriage to Alexandre Marie de Boisgelin, and then to their son-in-law, Count Karl Jacques Marie Theodore Bonnin de La Bonninière of Beaumont (1852-1913), husband of Henriette Marie Berthe of Boisgelin (1856-1925). Their eldest son, Count Etienne de Beaumont (1883-1956), a friend of Cocteau, a patron of the Russian ballets of Serge de Diaghilev, Braque and Picasso, gave famous parties in the Hôtel. In 1946, the Hôtel, with its garden was classified as a historic monument.

The Rothschilds acquire the property

After the death of the Comte de Beaumont, who died childless, the Hôtel was acquired by Baron Élie de Rothschild (1917-2007) and Baroness Liliane (née Fould-Springer (1916-2003). They remodelled the interior, and, in the 'Boffrand' salon, installed woodwork executed by the carpenters Taupin, Le Goupil and Desgoulons between 1720 and 1723 for the Hotel de la Comtesse de Parabère , No. 22 Place Vendome , which belonged to Baron Fould-Springer, Baroness Liliane's father.

In the 1970s , the Rothschilds gifted the Hôtel to the President of the Republic of Cote d'Ivoire, Félix Houphouët-Boigny (1905-1993), who made it his Parisian residence until his death. In the mid-1990s, still owned by the Republic of Côte d'Ivoire the Hôtel, the property was gradually abandoned. In 2008, Côte d'Ivoire put up for sale a hundred pieces of furniture to finance the restoration of the Hôtel. 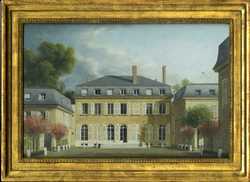