Still House was the ‘cottage’ on Long Island, NY, which became the residence of Baron Eugène von Rothschild (1884-1976) and his wife Cathleen 'Kitty' Wolff (1885-1946) when they moved to the United States during the Second World War.

Eugène was the fourth son of Albert and Bettina. He saw active service in the First World War, and in April 1925, he married the socialite 'Kitty' Wolff and lived most of the time in Paris with her. Kitty, an American, was a friend of Wallis Simpson, and through this connection, Eugène's home at Enzesfeld, outside Vienna, became a focus of world attention in 1936. When Edward VIII abdicated in order to marry Wallis, he made straight for the sanctuary of Enzesfeld. After the outbreak of war, Eugène went to live on Long Island in the USA where he pursued his interest in mathematics and, after Kitty's death in 1946, travelling. In 1952 he married Jeanne Stuart. They had property in Manhattan, as well as a house in England, but finally settled in Monte Carlo, where Eugène died in 1976.

During the 1920s and 1930s, Long Island became the summertime playground of the rich, famous and politically powerful, as it was within easy travelling distance (just over 20 miles) from New York, especially Wall Street. J. P. Morgan Jr., the Vanderbilts and the Whitney family all had properties in the area. During and after the War, the glamour of the area faded as it became difficult to staff the enormous mansions. However for the Austrian born Eugène it provided a safe refuge from the turmoil of war-torn Europe, and also provided a haven for Kitty’s guests, most notably the Duke and Duchess of Windsor. The Duke had been coming to the North Shore area since the early 1920s for the polo matches.

The house was elegantly proportioned with a whitewashed brick facade, with ivy and wisteria. Oriented around a large central hall with a graceful spiral stairway, there were six reception rooms on the first floor. Almost all opened to terraces, commanding delightful views. In the large living room, three immense Palladian windows overlooked a terrace and the distant countryside. A wrought-iron stairway led to a balcony in the huge, magnificently panelled double height library, with panelling rumoured to have been salvaged from the Cunard liner, the first Mauretania. On the second floor were five large bedrooms, and a ‘sun-deck’. The property included servants’ bedrooms, together with many outbuildings including a laundry and garages.

The property still exists today and has recently been renovated. 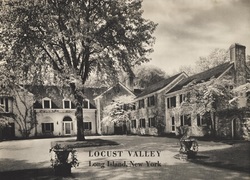