The Château d'Abondant, built in the 17th century in the Louis XIII style, is located in the current commune of Abondant in the present department of Eure-et-Loir and the region Center-Val de Loire.

The first owner of the estate was Pierre de Bigot, Lord of the Fay and the forest of Houdan.  In the early 1600s, Joachim de Bellangreville, Grand Provost of France, acquired the seigniory of Abondant. In 1645, his widow, Marie de La Noue, exchanged the estate with Jacques Bouchet de Sourches, abbot Of Saint-Martin de Trouart for the estate of Montguichet near Gagny. In the 1750s, the courtier Louis II of Bouchet de Sourches (1711-1788), Grand Prévôt de France, enlarged the Château, engaging the architect Jean Mansart de Jouy. The main building was transformed with two symmetrical pavilions at its ends, kitchens were added, and a grand staircase was created.  Louis' son, Louis Francis, the Marquis de Tourzel, inherited the estate, and his wife, Marie, a music lover, built a theatre in the gounds which still stands today. In 1786, Louis Francis was killed in a hunting accident; surviving the Revolution, under the Restoration, his widow was made Duchess de Tourzel. The de Tourzel branch died out in 1845, and, through marriage, the estate passed to the house of Pérusse des Cars. Louis Albert Philibert Augustin, fourth Duke of the Cars, sold the estate he had inherited through his wife in 1902, though not before removing much of the historical interior to his house in Paris.

In 1920, Lieutenant-Colonel Henry Herman Harjes, an associate American banker of JP Morgan & Co. in France, bought the estate, primarily for its excellent hunting. However tragedy struck when his wife Dorothy Harjes, aged 25, was killed in a riding accident in 1923. Harjes (who was credited with introducing polo to France) died during a polo match in 1926; the Château and its estate was put up for sale.

In 1937, the estate  was purchased by Baron Jules de Koenigswarter (1904-1995) and his wife Baroness Kathleen Annie Pannonica (Nica) de Koenigswarter (née Rothschild) (1913-1988), using a large proportion of Nica's inherited capital. According to the biography by her niece, Hannah, "Nica became the mistress of a vast red and yellow mansion set in two hundred acres of landscaped driveways and woodlands ... one of the finest examples of Louis XIII architecture in France ... the whole first floor comprised a series of highly decorated salons with windows twelve feet high. On the second and third floors there were seventeen grand bedrooms ... and fourteen modernised bathrooms. The entire top floor housed the servants' quarters, while the outbuildings included a garage for eight large cars and stabling for thirty horses. The property had its own dairy, and kennels for a private pack of staghounds."

Jules de Koenigswarters remained there until 1940; when the French government surrendered to Germany on 22 June 1940, he left for England to volunteer with the Free French Army. Nica remained in France at the Château, now devoid of staff, opening her doors to passing refugees and evacuees. However Jules got word to Nica that she must escape. She managed to secure exit visas for herself and children, and fled to safety with family in England, and later settled permanently in the United States.

In the spring of 1945, the Château housed the El Alamein Center of the First French Free Forces DFL. In 1951, the estate was transformed into a medical-social institution dedicated to the care of refugee and stateless elderly. A new Gerontology unit was built in the grounds in 1991. 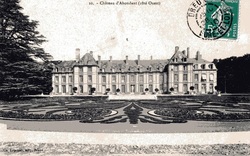