Hemsbach is historically in the German territory of Baden. In 1762, Franz Blesen bought up the old Hemsbacher castle estate and in 1764 built a large house in the style of an Italian villa.  After several changes of ownership, Carl Mayer von Rothschild (1788-1855) acquired the estate in 1839, and was appointed the first honorary citizen of Hemsbach in the same year.

Carl extended the original house, adding two large wings c.1850, and laid out a grand park. After Carl's death in 1855, the estate had a variety of owners, but gradually fell into disrepair. In 1925, the local municipality acquired the property, and in 1928, after refurbishment, the administration occupied the villa as its Town Hall.

By the late 1980s, the property was again in need of renovation, but it was not until 2006 that major renovations were begun, in favour of a design that promised the largest gain in space, leaving the appearance of the villa untouched. This provided for a central hall with a light, continuous stairwell from the ground floor to the third floor up to the second floor two-storey. The horizontal development, including a new lift regrettably necessitated the removal of the historic staircase dating from 1840.

Parallel to the refurbishment of the building, in 2008 redesign of the grounds began, and in 2009 the magnificent new Town Hall was officially opened. 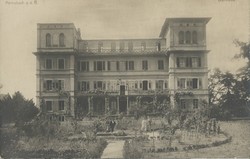