The name Rothschild is associated with Schloss Rennhof in Hüttenfeld, a district of Lampertheim in the Bergstraße district of Germany. It was formerly in the Hemsbacher district, where between 1839-1850, Carl Mayer von Rothschild (1788-1855) had purchased and rebuilt the Rothschild Villa, Hemsbach, and where in 1839, he was appointed the first honorary citizen of Hemsbach.

In 1953, the property was sold to the Lithuanian Central Committee in Germany, for use as a High School, and the central offices of the Lithuanians in Germany. Heavily damaged by fire in 1984, the exterior of the property has now been faithfully restored, and contains apartments belonging to the school.

A striking feature is the tower which precedes the three-storey central building, which transitions from the square into a polygon above the roof, topped with a crenellated viewing platform. The large park behind the building is designed as a landscaped garden. To the north lie the modern school buildings of the high school. 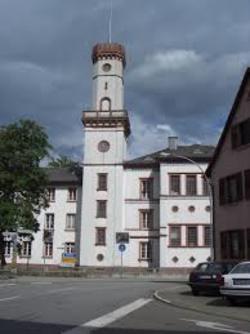