Valentine Noémi von Rothschild was born in Vienna on 25 May 1886. Brought up with five brothers, she was aged only five when her mother died. Valentine was devoted to outdoor pursuits, especially gun sports, in which she was highly skilled.

She married Baron Sigismund von Springer on 8 September 1911, and named their two children, Albert and Bettina, after her parents. Albert settled in Israel in 1950, the year Valentine returned to Austria after a war-time exile in England, and Bettina married Kurt von Reininghaus, a diplomat. 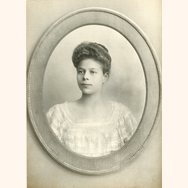