Lionel Nathan de Rothschild was the eldest of the three sons of Leopold and Marie. He was born on 25 January 1882. Lionel was educated at Harrow and Trinity College Cambridge. In 1912 he married Marie-Louise Beer the sister of Nelly de Rothschild (née Beer) who had married Robert de Rothschild in 1907. Lionel and Marie had four children; Rosemary, Edmund, Naomi and Leopold.  Along with Robert, Nelly and their children, Lionel and his family enjoyed long summer holidays touring Europe on his yachts.

On 1 April 1915, along with his cousin Charles (1877-1923) Lionel became a Partner at New Court. Nathaniel Mayer, 1st Lord Rothschild (1840-1915) who had been Senior Partner at New Court since 1879 had died on 31 March 1915, to be succeeded by his brother Alfred (1842-1918), who himself was in poor health. The official insistence (from no less than the King himself) that Lionel should remain at New Court to direct the affairs of the London House did not prevent him from serving his country with distinction during the First World War. He served in the reserves as a major in the Buckinghamshire Yeomanry and managed the City of London's recruiting office, earning an OBE and a 'valuable services' mention. Lionel became Senior Partner in 1923 on the death of his cousin Charles. Under Lionel, the bank began a steady transition towards advisory work and finance raising for commercial concerns, including successful bond issues for the London Underground, and issuing shares in the UK business of F.W. Woolworth.

Lionel was closely attached to the Vale of Aylesbury, and served as the Conservative MP for the Aylesbury constituency from 1910 to 1923. When not conducting business at New Court, Lionel could be found indulging his passion for horticulture. Indeed, he once described himself as 'a banker by hobby but a gardener by profession'. Selling Halton House which he inherited from his uncle Alfred (1842-1918), Lionel purchased the Exbury estate in 1919. It was Lionel’s gardening passion which led him to choose Exbury with its 2600 acres, and it was here that Lionel realised his horticultural vision. The climate was gentle here and the soil was acid, ideal for the flowers which were to become his passion – rhododendrons. The estate included some 250 acres of overgrown woodland. Labour was recruited in huge force to create the gardens: a team of 150 men and 60 trained gardeners were employed to clear the land, lay paths and manage the planting, and 22 miles of irrigation pipes were laid. Two acres of greenhouses were put up and a million plants were introduced. Here Lionel grew orchids and developed hundreds of new hybrid rhododendons and azaleas (many being named after family and friends) for which the estate has become famous. The Gardens first opened to the public in the 1930s, the entrance fees raising funds for local charities. Lionel's interests extended beyond the boundaries of his estate; he corresponded regulalrly with leading botanists, plant-hunters and garden owners and designers of the day, and was a founder member of the Roads Beautifying Association.

Motoring was another passion. An automotive pioneer, Lionel was a founder member of the Royal Automobile Club. He and his brother Anthony Gustav (1887-1961) were members of the Cambridge University Automobile Club, founded in 1902, and whilst at Trinity College, Lionel was summoned for “driving a motor car at a greater speed than 12 mph”, and fined the sum of £1. Lionel favoured an early make of car called the Orleans. He had a faithful mechanic, a young man called Martin Harper who was working in his brother’s garage in Cambridge when he first met Lionel. Before the First World War Lionel and Harper drove Mercedes, Napiers, Wolseleys and Siddeleys across France, Italy, Spain, Germany and North Africa. Harper writes about these days in his book Mr Lionel: an Edwardian Episode (London: Cassell, 1970). Combining his business skills with his great interest in things mechanical, Lionel served on the board of The Wolseley Tool & Motor Car Company Ltd between 1905 and 1909. Lionel was a keen advocate for Wolseley, and he and Harper often filed test reports back to them from their excursions.

A third diversion, was yachting, which Lionel combined with horticulture, collecting seeds and plants on longer journeys. Lionel’s interest in all things racing began while he was at Cambridge. In 1903, Sir Alfred Harmsworth, proprietor of The Daily Mail, began funding the world’s first powerboat racing prize, The Harmsworth Trophy. In a new Napier motor-boat, equipped with the largest six cylinder engine yet built by the manufacturer S.F. Edge, and sharing the crewing with his friend, the Hon. John Scott-Montagu and Lionel entered the 1905 challenge, a race over 35 miles in the Bay of Arcachon in France. They crossed the finishing-line in a winning time of 2 hours, 2 minutes, 26 seconds. During these two years they won several gold medals in the boats Napier II and Yarrow Napier. The following year the pair won the world water-speed record at 28.8 knots, and in 1907 went on to win the prestigious Perla del Mediterraneo in Lionel’s boat the ‘Flying Fish'.

Lionel also had two large yachts built to his specification by Camper & Nicholson of Gosport; the TSY Rhodora I, followed in 1929 by the TSY Rhodora II. Lionel's son Edmund recalled “Rhodora II had a hold which was large enough to carry a motor car – latterly an immensely powerful 50.7-hp Rolls-Royce touring saloon which my father bought in 1936. She was manned by a crew of twelve, and could comfortably accommodate my parents and us four children, our first cousins Alain, Diane, Cecile and Elie, who would sometimes join us.”

Lionel was a keen photographer and early experimenter with film, and the short-lived but exquisite autochrome, the first colour widely available photographic process, launched in Britain in September 1907. After a full and varied life, Lionel de Rothschild died at his London address, 18 Kensington Palace Gardens, on 28 January 1942, three days after his 60th birthday.

Marie-Louise Eugénie Beer, Mrs Lionel de Rothschild (1892-1975) was descended from a family of Berlin financiers. Her grandmother, Régine Bischoffsheim (1825-1893) of the German-Belgian Jewish banking family married the financier Julius Alfred Beer (1828-1913). Julius Beer's uncle was the composer Jacob Liebmann Beer (known as Giacomo Meyerbeer) (1791-1864), one of most frequently performed opera composers during the nineteenth century. Régine and Julius had three children: Amélie Wilhelmine Liliane (1850-1924), Guillaume Louis (1854-1913) and Edmond Raphaël (1857-1912). Edmond Raphaël married Alice Kohn (1861-1957). They had three children, Michel (1885-1957), and two daughters who both married into the Rothschild family. Gabrielle Régine (Nelly) Beer (1886-1945) married Robert de Rothschild (1880-1946) in 1907, and her sister Marie-Louise Eugénie Beer married Lionel Nathan de Rothschild in 1912, after a courtship in which he pursued her across Europe in a range of automobiles.

After Lionel had purchased Exbury in 1919, she spent so many happy hours in the garden he created by her husband. Though she claimed no horticultural expertise, she had an instinctive feeling for nature, and after Lionel's early death in 1942 her love for the natural world deepened into a determination to carry on his work as a lasting memorial to his great achievements in horticulture. She had the rare distinction of being a mother who was always in demand by her two sons and two daughters. She had her own establishment at Exbury, but her company was always sought at the homes of her children, Rosemary, Edmund, Naomi and Leopold. To them a party of any sort was in-complete without the presence of ‘Ma’, and their friends all adored ‘Mariloo’; indeed her son Leopold named one of the engines of his Exbury Steam Railway after her pet name. She was famous for her recollections of the innumerable and fascinating stories of the gardening weekends at Exbury in the years between the wars, when not only great gardeners were invited, but also leading men and women of the time. In her later years, she was quite content to walk the gardens quietly and learn more and more about her beloved rhododendrons. Her experience and knowledge were put to use by the Royal Horticultural Society when they invited her to sit on the Rhododendron Committee, which gave her immense pleasure. Marie-Louise died on 17 May 1975 at the age of 83. On a beautiful spring day she was buried, at her expressed wish, in her beloved village of Exbury.

Lionel's Autochromes - the colours of another age

The autochrome, the first colour widely available photographic process, was launched in Britain in September 1907. The invention of the French Lumière brothers, the process had first been demonstrated publicly in Paris. Lionel had a passion for photography, and loved to experiment; it was inevitable that he would try his hand with the autochrome, and so he did, and with considerable success. The 733 glass plates in his collection in The Rothschild Archive represent the largest single collection of autochrome plates by an individual British photographer to have survived.

Lionel’s earliest experiments appear to date from 1908 and by 1909 he was bringing back from his tour of Spain colour plates of Granada and other points en route. At home he began to take pictures in the gardens of Ascott in Buckinghamshire, the family home designed for Lionel’s father in the 1880s. Other images were taken at Gunnersbury Park in west London, and the French estate of his cousin Edmond at Boulogne-sur-Seine, outside Paris. His work also includes portraits of family and friends. 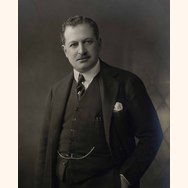