Evelyn Achille de Rothschild was born on 6 January 1886, the son of Leopold and Marie Perugia. During his childhood he spent many long summers in Scotland at the Sassoon family's Speyside lodge where he enjoyed to the full all the sporting activities the area could offer.

He was a close friend of his cousin, Neil Primrose (1882-1917), the son of the Earl and Countess of Rosebery, Lady Rosebery was Hannah Rothschild) (1851-1890), and the Roseberys also joined the summer parties. Evelyn was an exceptionally fine horseman. He went to Trinity College, Cambridge in 1904, and in 1907 became Joint Master of the Cambridge University Draghounds. He twice represented the University in the Grind and rode the winners of several races in the University Steeplechases.

He entered into the family business at New Court in 1907, although he never became a partner. In 1911 he travelled to Canada with his friend S.D. Brocklehurst and visited Egypt and Syria. In 1913, he undertook a lengthy trip to to South America with his brother Anthony Gustav (1887-1961); the trip garnered much publicity in all the places they visited and they were treated as honoured guests. He also followed the example of his father Leopold (1845-1917) and he was active in Jewish affairs, serving as Treasurer of the United Synagogue, 1911, and Vice-President in 1917.

Evelyn Achille served as a Major in the Bucks Yeomanry (Royal Bucks Hussars), and was mobilised with his Regiment on the outbreak of the War. ln August 1914, he was promoted to the rank of Captain and left for Egypt in April 1915. He was then sent to Gallipoli, where he was temporarily in command of the Regiment, but after three months there was invalided to the base. He remained in Egypt was present at both Battles of Gaza. In March 1917, he was promoted to Major. He was wounded in the Yeomanry charge on El Mughar (Palestine) on 13 November 1917, and died of wounds sustained in battle in the Citadel Hospital, Cairo, four days later. His cousin Neil Primrose was killed in the same battle. The Officer Commanding the Bucks Yeomanry wrote:

"The Regiment was taking part in a mounted charge on the Turkish infantry, who were very strongly posted on some high ground, El Mughair. I attacked with the Regiment in column of squadrons, and Evelyn was with the 2nd Squadron and was to take command of the two leading Squadrons on reaching the objective. We had some two miles of open country to cross, which was fairly swept by machine-gun and rifle fire. It was about half-way across this plain that Evelyn was struck down by a bullet. After all his death was a glorious one, killed when charging at the head of his men of Bucks.”

"And then Evelyn has gone - a friend of fifteen years. Evelyn was a 'very perfect gentle knight; and as Second-in-Command of the Regiment almost ' more royalist than the king.’”

Evelyn Achille was buried (with no members of his family present) in the Jewish cemetery in Cairo. On 13 October 1919 his remains were re-interred in Rishon-le-Zion Jewish Cemetery, Israel; again no members of the family were present, but members of the Zionist leadership assembled in tribute. It is believed that the re-interment weas carried out thanks to the intervention of Lord Dalmeny in Cairo (Dalmeny had been adjutant and aide-de-camp to General Allenby in France, Palestine, and Cairo), James de Rothschild (1878-1957) and the Zionist leadership in Palestine. A memorial to Evelyn Achille was erected by the family in Willesden United Synagogue Cemetery.

A  scholarship was established at Harrow School in 1918 in memory of Evelyn Achille, "in order to encourage among the boys at Harrow School a due appreciation of the qualities of devotion to duty, truthfulness, unselfishness, loyalty and consideration of others." 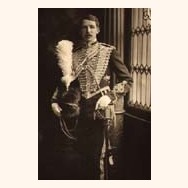