Henri James Nathaniel Charles de Rothschild, the son of James Edouard and Laura Thérèse, was born on 26 July 1872. After the death of his father in 1881, Henri and his sister Jeanne spent a confined childhood with their mother who was keen that they should have a strong sense of public duty. Both children were familiar with the Rothschild hospital, dispensary and other amenities at Berck-sur-mer, established by their father James Edouard (1844-1881) and Henri went on to study medicine.

To his mother's astonishment, Henri married Mathilde de Weisweiller, one of Jeanne's friends, on 22 May 1895. They became a glamorous feature of Parisian life, a world in which Mathilde was particularly at her ease. The couple had three children, James, Nadine and Philippe. In later years they lived quite separate lives. Henri played a minor role in the fortunes of the Paris bank, serving as a director of the Nord Railway, the family's major rail interest.  An early interest was motor sport; from 1901 Henri de Rothschild (1872-1947) sponsored the Coupe Rothschild for the Nice motor race. Between 1901 and 1903 the race was won by Léon Serpollet, and at the race in April 1902 he reached 120.8 kph, breaking the world speed record. His car, a 100hp Serpollet, was nicknamed 'the Easter egg'. The 1903 race is commemorated in tiles on the facade of the former Michelin building, Fulham Road, (London, 1911).

Literature and the arts

Henri developed his interests in the arts, as essayist, playwright, and creator of the Pigalle theatre in Montmartre, always wreathed in the smoke from his Gaulois cigarette, as his son Philippe remembered. Papers concerning his writings, including drafts of his works (many written under the pseudonym André Pascal) will be found in the Moscow papers (58 series). Henri was a keen yachtsman and motorist and formed a collection of Têtes de mort, which was bequeathed to the Musée des Arts Decoratif. His collection of rare books autographs was presented to the Bibliothèque National de France.

Henri de Rothschild became a medical practitioner specialising in infant medicine and nutrition, publishing over 100 papers and making substantial practical contributions to the field. He experimented with the pasteurisation of milk and established a system of free distribution of milk for the needy, and other practical projects to improve public health. During the First World War, while in charge of the military hospital at Soissons, he invented a portable burns unit for use in battle zones. After the war, in 1919 he became one of the founders of the Curie Foundation.

His support for healthcare was also practical. In 1872, Henri’s father, James Edouard founded a hospital at Berck-sur-mer in the Pas de Calais which he named after his late father, Nathaniel. The hospital took on a therapeutic role in the treatment of tuberculosis, and James Edouard’s vision was supported and further developed by Henri; the Berck dispensary was founded in 1892 at Henri’s request. A wide range of medical services were established such as dentistry and surgery, although the dispensary specialised in the care and nourishment of infants. This aspect of the service became independent in 1904, in which year alone 192,741 litres of sterilised milk were dispensed. In 1894, Henri built a hospital in the rue Marcadet in Paris, with 100 beds, the first stage of the creation of what was to become the Mathilde-Henri de Rothschild Foundation. The foundation was renamed in 1929, after a thorough reconstruction, in memory of Henri's wife. The polyclinic was equipped with the most up to date facilities of the time.

Henri spent most of the war years in Lisbon, where he began to work on his memoirs, published as Croisières autours de mes souvenirs. He died in Lausanne in 1947. 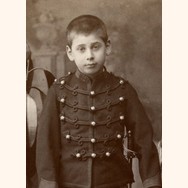