James Gustave Jules Alain de Rothschild was born on avenue Friedland on 7 January 1910 and died in New York in 1982. A leader of the Jewish community in France, he served his country in the 2nd World War, earning the Croix de Guerre after five years as a prisoner of war. On his return to France from America in 1947, he became a partner in the Paris House and served on the board of the Nord railway company.

Alain graduated from the Ecole libre des Sciences politiques in 1931 and after his military service spent some time in America. In these years, he was a keen amateur pilot. He married Mary Chauvin du Treuil on 26 January 1938. From the late 1940s, Alain invested his considerable energies in the service of the Jewish communities of France and Israel. 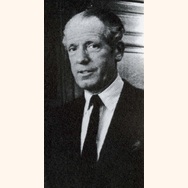