Cécile de Rothschild, born on 15 March 1913, was the daughter of Robert and Nelly. As a child she lived with her family at 23 avenue Marigny and at Laversine. In later years, Cécile lived on the Faubourg Saint-Honoré in Paris, and in a house near to Laversine.

Cécile inherited many Rothschild passions: motoring, haute cuisine, yachting, wine, gardening, golfing and painting. Aged 13, she was given by her father Cézanne's Les Baigneuses, and this item formed the basis of her considerable collection which included a number of works by Picasso.

She was the the companion and protector of the actress Greta Garbo, and on the few occasions when Garbo was seen in public, she was usually accompanied by Cécile. 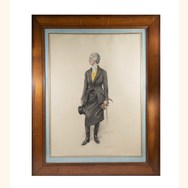