Gwendoline Charlotte Frances Joan von Rothschild was the youngest child of Alphonse and Clarice von Rothschild. She was born in Vienna on 19 January 1927, but left the city after the Anschluss with her sister, Bettina. She spent the war years in Manhattan, and on 18 March 1948 married an American, Roland Henry Hoguet. Gwen died on 27 March 1972. 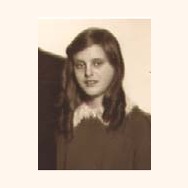