Kathleen Annie Pannonica Rothschild was born in London on 10 December 1913, the youngest child of Charles and Rozsika. She studied art in London, Paris and Vienna, going on to create a series of abstract paintings. She flew her own plane and met her future husband, Baron Jules de Koenigswarter whilst piloting in France. They were married in 1935, and spent time at his family estate Château d'Abondant in Eure-et-Loir.

In 1940 she joined the Free French Forces and was assigned to take medical supplies to West Africa; she then served as a decoder in French Intelligence as well as a broadcaster for a Free French radio station and an ambulance driver for the 1st Free French Division in Egypt and North Africa.

She was passionate about music early in life, especially jazz. After her marriage was dissolved in 1956, she moved to the United States where she actively supported jazz and some of it greatest musicians.

She wrote a number of important articles about jazz, became a member of the Musicians' Union, and was instrumental in the abolition of the notorious Cabaret Card in 1967. Her great knowledge of jazz and her unstinting efforts on behalf of its musicians earned her admiration world-wide. Musicians dedicated over 20 compositions, many classics, to the woman they knew as Nica or 'the jazz Baroness'. Several jazz nightclubs, records shops and a restaurant were named in her honour.

Nica loved cats and was surrounded by them in her home in New Jersey overlooking the Hudson River. She died on 30 November 1988. She had 2 sons and 3 daughters, 2 grandsons and 2 great grandchildren. 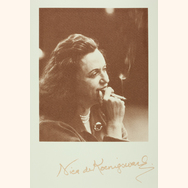