Edmund Leopold de Rothschild was born in London, at 46 Park Street, Mayfair, on 2 January 1916, the first son of Lionel de Rothschild (1882-1942) and Marie-Louise née Beer (1892-1975).  At the time of his birth, his father was a junior partner at New Court, and MP for Aylesbury.  His mother, Marie-Louise, was a great-great-niece of the composer Meyerbeer; and her elder sister Nelly was married to Baron Robert de Rothschild, of the French branch of the family.

Eddy (as he was known) was brought up at Exbury House, the estate his father acquired in late 1918, bounded by the New Forest, The Solent and the Beaulieu river.  He  was educated at Harrow and Trinity College, Cambridge.  Part of every summer holiday was spent cruising Europe's coastline aboard his father's yachts, Rhodora I and II. Rhodora II, a magnificent vessel, had a hold large enough to accommodate Lionel de Rothschild's Rolls-Royce.

After Cambridge, in 1937 Eddy was sent by his father on an 18-month tour around the world, of which he published an account as Window on the World (1949).  He went to Africa, rode horseback over the Andes, and motored across the Northern Territories in Australia. He pressed on to Burma, India and Afghanistan, calling, en route, on the Viceroy, Mahatma Gandhi.

He returned to England in May 1939 and worked at N M Rothschild & Sons until the outbreak of war in September.  In 1935 he had joined the Royal Bucks Yeomanry.  In January 1940 the Bucks was among the first territorial regiments to join the British Expeditionary Force in France.  Eddy went with them, but due to recurring bouts of Staphylococcus aureus, a near-fatal blood infection in those days, he was not involved in the action.  As a battery-captain in the 77th Highland Field Regiment (RA), he went to North Africa with 4 Division, in the First Army.  He saw action at Oued Zarga, Banana Ridge and Peter's Corner. At Cap Bon, after the Allied rout of Axis forces, he had to find supplies to feed 10,000 PoWs. In the aftermath of the war, Eddy was a major in the newly-formed Jewish Infantry Brigade, and drove up through Austria and Germany in a truck with the Star of David painted on its side. At Mannheim, starving Jews in concentration-camp garb came up to him out of the crowd.

Having joined the family bank in 1939, Mr Eddy, as he was known by the staff, became its effective head in 1955, when his uncle Anthony de Rothschild (1887-1961) suffered a severe stroke. A partner from 1947, from 1952, Mr Edmund's chief preoccupation was with what was then the most costly project ever undertaken by private enterprise: the development of the vast hydroelectric potential of the Hamilton (later Churchill) Falls in Labrador. He led the consortium, and crossed the Atlantic more than 400 times over the 20 years the project took to complete.

Edmund de Rothschild became senior partner in 1960. He opened the partnership to non-family members, beginning with David Colville, brother of Sir John Colville, Churchill's private secretary who was appointed in July 1960 as the first non-Rothschild partner. Mr Edmund presided over the bank's transition from a highly conservative family firm to a modern institution, and oversaw the demolition and rebuilding of New Court 1962-1965. In 1966, Mr Edmund de Rothschild welcomed the Japanese Economic Mission to Europe to New Court strengthening ties between the UK and Japan; in 1973, The Order of the Sacred Treasure, one of Japan’s highest honours,  was conferred upon Edmund de Rothschild by Emperor Hirohito “in full recognition of your great contributions in the international monetary field to the economic and industrial development of Japan and the ceaseless endeavours you have devoted to the promotion of Japanese-British friendship"

Edmund de Rothschild bcame the first Chairman of N M Rothschild & Sons Limited in 1970, when the firm became the last London accepting house to relinquish its private partnership status. He stepped down as chairman in 1975, to be succeeded briefly by his cousin Victor, 3rd Lord Rothschild (1910-1990), and then by his cousin Sir Evelyn de Rothschild (b.1931).

After his return from the Second World War, Edmund set about the restoration of Exbury Gardens in Hampshire, the 260-acre woodland garden created by his father Lionel in the 1920s and 1930s.  The gardens had been greatly neglected since Lionel's death in 1942, as Exbury House had been requisitioned by the Admiralty as a “Stone Frigate”, HMS Mastodon, responsible for the administration, victualing and training of the crews moored in the Beaulieu River during the war.  Over the next 50 years he replanted some three-quarters of the acreage, and produced several dozen new rhododendron hybrids.  In 1955 he opened Exbury Gardens to the public.

Eddy worked hard for charitable causes, in particular the Queen's Nursing Institute, of which he was a trustee, the Not Forgotten Association, and the Association of Jewish Ex-Servicemen and Women, of which he was for many years president.  He was a vice-president of the Council of Christians and Jews. He held the Territorial Decoration, and was appointed CBE in the New Year's Honours, 1997. In 2005 he received the Royal Horticultural Society's highest award, the Victoria Medal of Honour. His autobiography, A Gilt-Edged Life, written with George Ireland, was published in 1998. 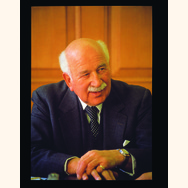