She was the second daughter of Lionel Nathan de Rothschild (1882-1942) and Marie Louise Eugénie Beer (1892-1975).  She married Jean Pierre Reinach on 2 October 1941. Tragically, he was killed in action in 1942. They had a daughter. Naomi married Bertrand Léopold Goldschmidt, son of Paul Goldschmidt, on 26 February 1947, and together they had a son and daughter.  Naomi Louisa Nina de Rothschild usually went by her middle name of Nina.  Her main residence was at 11 Boulevard Flandrin, Paris, France. 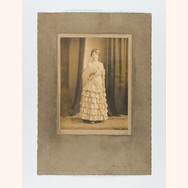