Leopold David de Rothschild was born in London on May 12 1927, the youngest child of Lionel Nathan de Rothschild (1882-1942) and Marie Louise née Beer (1892-1975).  Leo, as he was known, was brought up mostly at Exbury House, on the estate his father had acquired in late 1918, which is bounded by the New Forest, The Solent and the Beaulieu river.  It was there that his father created the 250-acre woodland garden, famous for its rhododendrons and azaleas. A keen yachtsman, he fondly remembered family holidays with French cousins on his father’s yacht, Rhodora; and continued to sail all his life, becoming a leading figure in The Solent Dragon fleet for many years.

During the Second World War, Leo was evacuated for three years to North America with other young Rothschild cousins from Austria and England, with whom he formed enduring bonds.  Returning to England in 1943, Leo went to Harrow, where he sang in the school choir; and later, during two years’ National Service in the Royal Navy serving in the cruiser Kenya, he formed a gramophone club which gave weekly concerts.

He went to Trinity College, Cambridge, to read French and Russian.  After leaving Cambridge and brief training at other banks, Leo joined his family’s bank, becoming a partner in 1956 and in 1970, when NMR became the last London accepting house to relinquish its private partnership status, an executive director.  From 1970 to 1983 he sat as a director on the Court of the Bank of England.  He was heavily involved in re-establishing Rothschild’s Latin American offices, especially Mexico, Chile and Brazil, where he was responsible for leading the financing for the Rio-Niteroi Bridge.  He played an integral part in the development of the Banking Division and established Rothschild Intercontinental Bank in 1969.  He was always committed to the welfare of the bank’s staff and pensioners, whom he regularly invited to visit Exbury Gardens.

Leo’s French-born mother, Marie-Louise Beer, was a great-great-niece of the composer Giacomo Meyerbeer and she encouraged his musical interests.  When he began working in London he joined the Bach Choir, and sang as second bass for some 50 years.  Eventually he served as chairman, and later president, of the choir.  Over the years he served as either president or chairman of many other leading British musical institutions, including the English Chamber Orchestra, English National Opera and the Royal College of Music Theatre; he was also a friend of Sir George Christie and helped raise funds for the new opera house at Glyndebourne.

In true Rothschild spirit, he gave generously to good causes.  Through the Leopold de Rothschild Charitable Trust he provided support to the London Symphony Orchestra, the London Sinfonietta, the Rambert Dance Company and the St John’s Hospice.  The trust also funded scholarships at the Royal College of Music.  Perhaps the charity closest to his heart was The Countess of Munster Musical Trust, which helped countless musicians over the years.  He also served on the board of the National Theatre; he was a keen theatregoer and also something of a film buff. In 1985 he was appointed CBE for services to music and the arts.

Leo’s other great passion was steam trains, and he served as a trustee of the National Museum of Science and Industry and as a member of the National Railway Museum Advisory Committee. At Exbury, he built a narrow-gauge steam railway; his good friend James Dunbar-Nasmith designed the station. 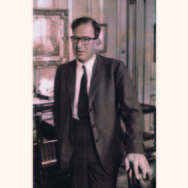