Nadine Charlotte Thérèse de Rothschild was born in Paris on 11 June 1898. For most of her adult life, Nadine accompanied her husband, Adrien Thierry, on his various ambassadorial postings, living at times in Madrid, London, Athens and Bucharest. She was awarded the Legion d'Honneur for war-time services.

Nadine died at her Cannes villa La Sansovino on 22 October 1958. The eldest of her three children, Jacques, became president of the Banque Lambert. 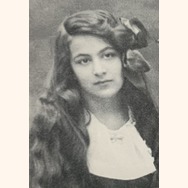