Amschel Mayor James Rothschild, born London 18 April 1955 was the son of Victor, 3rd Lord Rothschild,(1910-1990), and his second wife Teresa (née Mayor) (1915-1996). Amschel was educated at King's College Choir School and at the Leys School in Cambridge, and then at City University in London, where he read Economics, History and Archaeology. Archaeology remained a passion and he was appointed to the British Museum Development Trust Council when it was founded in 1994.

Amschel joined the family firm at New Court in 1987.  After serving his apprenticeship in Rothschild Asset Management and Rothschild's bullion department, he worked for six months in 1989-90 in the office of the chairman, his cousin Sir Evelyn de Rothschild, before being appointed first chief executive and then, from 1993, executive chairman of Rothschild Asset Management.  He also undertook a non-executive directorship of the Sun Alliance Group in 1995, maintaining its unbroken relationship with the Rothschild family since 1824, when the Alliance Assurance Company was co-founded by his great-great-geat grandfather Nathan Mayer Rothschild (1777-1836).

At the family estate, Rushbrooke Hall in Suffolk, Amschel managed a large arable farm, which included a fair acreage of fruit-trees from which he marketed his own apple-juice to London establishments such as the then fashionable club Zanzibar, where his future wife Anita Guinness, daughter of the banker James Guinness, worked. Anita and Amschel Rothschild married in 1981, and had three children; Kate, Alice and James. Amschel was a keen cricketer and motorbike and car racer, owning successively a Lotus 10, an AC Cobra, a famous 1954 250F Maserati, a 1964 Willment Daytona Coupe in which he won two Historic Sports Car Championships, and a 1957 BRM P25, the only original left in existence, which he raced from 1982.  In 1995 he won the Vintage Sports Car Club Phipps Trophy and the Hawthorn Trophy.  In April 1996, he won the Peter Collins Race at Silverstone. 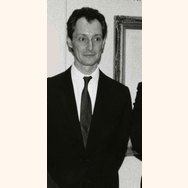