She spent her childhood in Paris, later moving to Compiègne, where father was mayor from 1935 to 1940. In 1942, she crossed the Pyrenees on foot with her mother and her sister, to Spain and Portugal, to join the Free French Forces in England.

An accomplished rider and passionate about hunting, she established the Futaie des amis hunt in 1961, which took over from the Vaux et Forêts, established by her father in 1926. She served as master of the Hunt until 2001, when "Mrs. Monique" as she was known, passed the baton to her son.

Note: The photograph on this page is not in the collection of The Rothschild Archive. 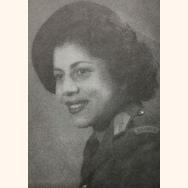