Amschel Mayer von Rothschild was the eldest of Mayer Amschel Rothschild's five sons. He was born in the house of the Hinterpfann in Frankfurt on 12 June 1773. The most pious, cautious and conservative of his brothers, Amschel continued the family firm in Frankfurt after their father's death in 1812. He was fond of quoting the words of their father 'of blessed memory', to reinforce the brotherly ties which bound them together in business.

Amschel was taken into the family business aged about twelve, and was soon travelling on behalf of his father to other trading centres of Germany. He was in fact the first of the brothers to establish a business centre away from Frankfurt, but his stay in Cassel in 1805 proved only temporary. In 1814 Amschel spent an uncomfortable few months in Berlin, handling subsidy payments to Britain's allies during the Napoleonic wars, and was only too pleased to return to the orthodox surroundings of the Judengasse early in 1815.

Amschel married Eva Hanau on 16 November 1796. The couple celebrated their golden wedding anniversary amid scenes of general community rejoicing, but their union produced no children, to Amschel's great sorrow. The sons of his brother, Carl, inherited the Frankfurt business from him.

Like his father, Amschel was aware of the importance of titles and honours to the furtherance of business. He was the recipient of a number of orders, and served as Royal Prussian Privy Councillor, Privy Councillor to the Electorate of Hesse, Royal Bavarian Consul and Prussian Consul General.

Amschel created a garden in 1816 at his house on the Bockenheimer Landstrasse. In 1851, Bismarck visited him there and recalled a short thin little man.....quite grey, 'a real old Jew pedlar who does not pretend to be anything else'. Amschel also had a house on the fashionable street, the Zeil.

The citizens of Frankfurt had reason to be grateful to Amschel, whose will created the Amschel von Rothschild Foundation. 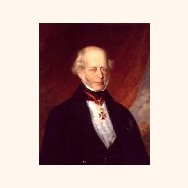