James Mayer de Rothschild was the youngest child of Mayer Amschel Rothschild. He was born in the house of the Grünes Schild in the Judengasse in Frankfurt on 15 August 1792. Six years later his brother Nathan left Frankfurt to further the family business which James himself was eventually to lead after Nathan's death.

From the age of 19, James was in Paris co-ordinating the purchase of specie and bullion for Nathan, and in 1814 and 1815 he was the linchpin in Nathan's masterplan to furnish Wellington's armies with funds. Remaining in Paris, first at rue Pelletier and then rue Laffitte, James founded the Rothschild firm of de Rothschild Frères. The House funded many loans to European governments and was instrumental in the development of railways in France and the rest of Europe.

James married his niece, Betty, the daughter of his brother Salomon, on 11 July 1824. The couple entertained on a grand scale, first in Paris and then in the château de Boulogne and at Ferrières. James became the trusted adviser of ministers and kings.

James held on to the reins of power within the family firm after the death of Nathan in 1836. His sons, brothers and nephews were in awe of his dynamic authority. Contemporaries remembered his quick wit, expressed in a heavy German accent, though the sharp tongue which went with it was not always benign. James was devoted to his extended family, but it was not beyond him to turn against any member whom he felt to have acted improperly. His response to the marriage of his niece, Hannah Mayer, displayed at once his demand for obedience and his faithfulness to the family's Jewish beliefs.

The purchase of Greuze's painting, La Laitière, in 1818 formed the basis of a magnificent art collection which he supplemented often in frenzied buying sprees from the grand sales of the Paris hotels.

His domination of the firm ended with his death on 15 November 1868. 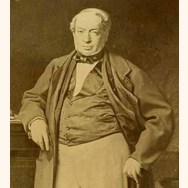