Betty von Rothschild was born in Frankfurt on 15 June 1805, the daughter of Salomon and Caroline Stern, and educated in Vienna.

Betty married her uncle James de Rothschild on 11 July 1824 and went to Paris to rule over one of the most elegant salons in the city, prompting the comment that:

'just out of her nursery she [did] the honours of her house as if she had never done anything else'.

Her guests included politicians, painters, artists, musicians, even royalty. She became a close friend of the French queen, Marie-Amélie, sat for Ingres, and was a patron of Chopin.

Betty was a generous, warm-hearted woman. She was the total French woman, determined that her children, to whom she was devoted, should share her pride in their country.

After James's death, Betty spent some months of each year in Cannes. Here as in Paris, a number of foundations and institutions bore testimony to her philanthropy.

She died in the Château de Boulogne on 1 September 1886. 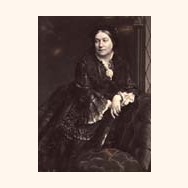