Charlotte de Rothschild, the eldest of Nathan Mayer Rothschild's children, was born in Manchester on 10 August 1807, bringing much joy to her father's employees and much anxiety when she became seriously ill as a baby.

Charlotte resembled her mother Hannah physically; both were rather tall and elegant and both were intelligent, cultivated women who devoted themselves to the upbringing of their children. Charlotte married her cousin, Anselm on 11 September 1826 in Frankfurt, where they settled in a house on Neue Mainzerstrasse. The couple also had a home in Vienna, where Anselm became more closely involved with the management of his father's branch of the family firm.

She was a talented artist - this painting of Charlotte and her family was one of her works - and encouraged her children's interest in art. She died on 17 May 1859. 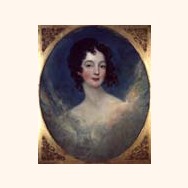