Anthony Nathan de Rothschild was born in New Court on 29 May 1810, and lived at 107 Piccadilly after his marriage to Louise Montefiore until in 1851 he acquired an estate at Aston Clinton, Buckinghamshire, an area soon endowed with public amenities for his tenants, including an infants school which he built as a sixteenth birthday present for his daughter Constance at her request.

After studying at the universities of Göttingen and Strasbourg, he served an apprenticeship to the family firm, spending time in both the Frankfurt and Paris houses, and became a partner in 1836. Anthony was closely involved in the management of the Chemin de fer du Nord, the family's main railway interest, and also responsible for the running of the Royal Mint Refinery in London from 1852 when Rothschilds acquired the lease.

In Buckinghamshire Anthony was a keen countryman and he became owner of a number of successful racehorses including Carnelion and Coomassie. His daughter, Constance, said he was of a naturally bright and cheerful disposition, ready to make the best of everything.

Anthony was active in the Jewish community, strongly supporting the Jews' Free School, and serving as presiding warden of the Great Synagogue, from 1855 to 1875. When the United Synagogue was formed late in 1870, Anthony became the first president. He was granted a baronetcy in 1847, which passed to his nephew Nathaniel Mayer on his death on 3 January 1876.

Louise, Lady Anthony de Rothschild (née Montefiore) came from a distinguished line of Anglo-Jewish aristocracy. Her father, Abraham Montefiore, was the brother of Sir Moses Montefiore. Her mother, Henrietta, was the daughter of Mayer Amschel Rothschild. Her marriage in 1840 to Anthony de Rothschild produced two daughters, Constance and Annie. The family lived at 107 Piccadilly, and Aston Clinton.

Wealthy, cultivated, well-educated and imbued with a powerful sense of religion and moral obligation, she focused her life around duty and service to others, becoming famous for a range of philanthropic works, from nursing sick villagers to founding village schools to participating in the management of the Jews’ Free School for poor children. Her position as the wife of Sir Anthony gave her an unrivaled social status that enabled her to found  the first independent Jewish women’s philanthropic association in Victorian England,  the Jewish Ladies’ Benevolent Loan Society and the Ladies’ Visiting Society. These benevolent societies were among many charitable organisations established by Jewish communities in England to assist the Jewish poor. Always concerned for her ‘less favoured sisters’ Lady Rothschild initiated and financed programs for immigrant girls after thousands of East European immigrant Jews flooded England form 1881 onwards. Following her example, her daughters Constance and Annie were later to play prominent roles in Jewish social philanthropy.

Many of Lady Anthony de Rothschild's private papers were inherited by her daughter, Constance, Lady Battersea (née de Rothschild) (1843-1931), who published extracts from her mother's papers, and her own reminiscences of family life. See:

[Note: some sources refer to Lady Anthony de Rothschild as 'Louisa'; this possibly reflects the German pronunciation of 'Louise'.] 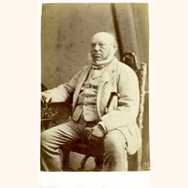