Hannah Mayer de Rothschild was the daughter of Nathan Mayer Rothschild and Hannah. She was born in New Court, London, on 10 March 1815, moving as a baby to the family's new home in Stamford Hill. Like her siblings, she received a musical education and played a harp of gold given to her by her father. Rossini was one of her tutors.

As a young woman, she went to visit her Paris cousins and attracted the attentions of Prince Edmond de Clary whose request for her hand in marriage enraged Nathan. Hannah Mayer's chosen husband, to whom she was devoted, was also a Christian, and the match, after her father's death, affected the whole family profoundly. Hannah Mayer married Henry FitzRoy on 29 April 1839, at St George's, Hanover Square, London.

The couple took a home in Berkeley Square, where both their children were born: Arthur Frederick in 1842 and Caroline Blanche Elizabeth two years later. They subsequently moved to 42 Upper Grosvenor Street.

After a fall from a horse at a very young age, Arthur was an invalid and died at the age of 15. His death provoked ill health in his father, who died shortly afterwards. Hannah Mayer lived to see her daughter married to Coutts Lindsay. The couple founded the Grosvenor art gallery in London. 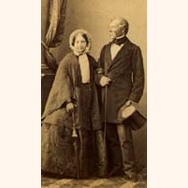