Mayer Amschel de Rothchild, or 'Muffy' as he was known to his family, was born in New Court on 29 June 1818.

He was the first of his family to receive an education at an English university, spending time at both Magdalene and Trinity College Cambridge after a spell at both Leipzig and Heidelberg universities. He followed a traditional Rothschild apprenticeship in the various houses, but never really played much of a part in the business.

Mayer was the first of the family to commission a truly grand residence, Mentmore Towers in Buckinghamshire. He, his wife (a cousin, Juliana Cohen, whom he had married on 26 June 1850) and their only child, Hannah, took up occupation in 1855.

Mayer established a stud farm at Crafton, near Mentmore, and was a member of the Jockey Club. One of his most successful horses was Hannah, which won three major races in 1871. He was himself a keen hunter in spite of his sixteen stone frame.

Mayer became High Sheriff of Buckinghamshire in 1847 and was elected Liberal MP for Hythe in 1859. He died on 6 February 1874. In his memory, his daughter Hannah gave funds for a lifeboat at Hythe station. 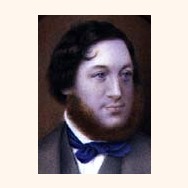