Charlotte von Rothschild, 'The never-to-be-forgotten Baroness', was the daughter of Carl von Rothschild of the Naples House and his wife, Adelheid Herz. She married her cousin, Lionel de Rothschild, in Frankfurt on 15 June 1836 and had five children. The couple lived at 148 Piccadilly and Gunnersbury Park, London.

Charlotte was born in Frankfurt on 13 June 1819, but her family divided their time between this city and Naples. She was an intellectual woman, linguistically gifted, and passionately involved in issues of education, not only for her own children but for the wider community.

Only days after her marriage, her father-in-law, Nathan, died, and Charlotte's new husband found himself obliged to take over the heavy responsibilities of running the London business. For some years, Charlotte felt herself obliged to follow the will of others, not only her husband, but her mother-in-law too, although she was close to the members of her extended family who lived nearby in London.

She drew her friends from a wide social circle: Disraeli was devoted to her and the editor of The Times, John Delane, admired her political and intellectual skills. She was a key player in a number of philanthropic activities, not least of which was the Jews' Free School. Two of her published works, Prayers and Meditations, and Addresses to Young Children, stemmed from her active work at the School. 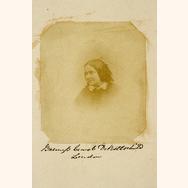