Adolphe Carl von Rothschild was born on 21 May 1823, just as his father Carl's Naples House was taking root in that city. His brothers took over the Frankfurt House and Adolphe's future was to lie with C M von Rothschild & figli Naples.

Adolphe, General Consul of the Duchy of Parma in Naples, preferred to pursue his interest in collecting works of art in which his judgement was sure and his taste exquisite. He was the first member of the family to be bought out of the partnership. After tortuous negotiations with his cousins, 'Dolly', as they knew him, was bought out of the family partnership in 1865, two years after the closure of the Naples House.

Together with his wife, Julie von Rothschild, whom he had married on 16 October 1850, Adolphe commissioned Joseph Paxton to build a château at Pregny on the shores of Lake Geneva, where they housed some of their fine collections of paintings and objects. In Paris, they lived on the rue de Monceau. An ophthalmological foundation established by Adolphe in Paris and named after him became the interest of his widow after his death from influenza on the rue de Monceau on 7 February 1900. 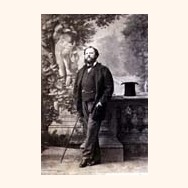