Charlotte was amongst the most outstanding artistic characters in her family. After her marriage, she lived in the rue du Faubourg Saint Honoré, and although Nat bought Château Mouton in 1853, the couple never made a residence there. Charlotte was a generous benefactor of charities, founding the Guild of Young Jewish Women which she supervised closely. Charlotte and Nat had four children; the first, Nathalie, died in infancy, and the third, Mayer Albert, lived for just four years. Her youngest child, Arthur, (1851-1903) never married, and scandalised some of the family with his behaviour. However, Charlotte and he remained close. James Edouard (1844-1881), Charlotte's second child, married Laura Thérèse von Rothschild (1847-1931), a Frankfurt cousin.

Charlotte's mother Betty was a great patron of music, in particular Gioacchino Rossini (a family friend) and Frédéric Chopin. Georges Bizet and Camille Saint-Saëns were regularly in attendance at Rothschild salons. Chopin taught the piano to both Betty and Charlotte. The composer also dedicated two works to Charlotte, his famous Ballade No. 4 in F minor, Op. 52, believed to have been written as as a wedding present for her marriage, and, four years later, his Waltz in C-sharp minor, Op. 64, No. 2.

In 1860 Charlotte published four pieces for piano (J. Maho, Paris), Polka in C minor, Waltz in F minor, Nocturn in C Minor, and Waltz in A minor. In the years since, the credit for the latter two has been given to Chopin, since they match, note for note, pieces published under his name. However, these 'Chopin' pieces were published posthumously, in 1937 and 1955, respectively, long after the composer’s death in 1849, suggesting Charlotte's pieces may well have been 'absorbed' into his papers and eventually mis-attributed to the more famous Polish composer.

Charlotte was a prolific and accomplished watercolourist, printmaker, and art collector. Charlotte and Nathaniel continued the tradition of patronage of the arts of the great Rothschild houses, maintaining friendships with such artistic figures as Jean-Baptiste-Camille Corot, Henri Rousseau, and Édouard Manet. Between 1835 and 1890, her homes became the focus of celebrated soirées attended by the most gifted artists, musicians, literary figures and bibliophiles.

Charlotte studied under Hercule Trachel (1820-1872), Nélie Jacquemart (1841–1912), and Eugène Lami (1800-1890). It was under Trachel’s tutelage that Rothschild developed her great talent for landscape painting; the two often travelled to Italy on artistic excursions. Charlotte exhibited her landscapes at the Paris salon as of 1864 as well as in London from 1879. Charlotte was one of only two women of the total 73 artists who participated in the exhibitions of the Société des aquarellistes français (the Society of French Watercolour Painters), of which she, together with Lami was a founding member, the other woman being Madeleine Lemaire.

In 1869, Charlotte published an album of her works, Italie - Souvenir d’un voyage de Nice à Génes par la Corniche, Vingt-trois de mes Dessins (Eaux-fortes), [Italy - Souvenir of a trip from Nice to Genoa by the Corniche, Twenty-three of my Drawings (etchings)], (privately published, Paris 1869). The volume was published in a small number of copies, strictly for distribution as gifts to family and friends. It includes etched views of areas between Côte d'Azur and Genoa, one of the great Romantic voyages pittoresques. The journey began in Nice and concluded in Genoa. Most of the plates, show harbours and coastlines from the viewpoint of the shore, although four are townscapes. The outlines of cities appear in some of the harbour plates as well; the emphasis falls on the romantic celebration of nature, with picturesque elements (fishermen, washer women) providing a sense of scale and enlivening the scenes. Unusually, the place names of the locales depicted are etched in the plate. The volume is extremely rare; regretfully, although the Archive colection contains examples of etchings after works by Charlotte, the Archive does not hold a copy of this volume, but copies are known to exist in the collections of the Bibliothèque Nationale de France, Cabinet des Estampes, and at the Bibliothèque de Cessole in Nice.

Following in the footsteps of her father, James, Charlotte was an important collector of European art. A large part of her collection was inherited through her husband Nathaniel, his collection being particularly rich in Dutch landscapes. However, like her father, Charlotte’s personal preference was for the 18th century. Following Nathaniel’s death, she acquired a number of works by Chardin, and works from more modern artists. Her magnificent collection included works from Fantin-Latour, van Dyck, Chardin, Hals, Greuze, Delacroix, Rousseau, Troyon, and Fromentin, among many others. Many of these were bequeathed at her death to museums including the Louvre, the Museum of Decorative Arts and the Cluny Museum.

In 1873, in the early years of her widowhood, Charlotte purchased the Abbaye des Vaux de Cernay in the Chevreuse valley, saving the ruins as she worked with the architect Félix Langlais to restore the former Cistercian monastery to her summer residence, an ideal setting for her exquisite collections of medieval and Renaissance objects. 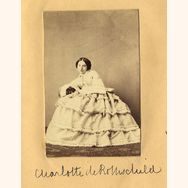