Mayer Alphonse de Rothschild, the eldest son of James de Rothschild and was born in the rue Laffitte on 1 February 1827. Alphonse married his cousin Leonora on 4 March 1857. He was a vivacious man, and enjoyed outdoor pursuits, particularly horse racing, and he was a perennially familiar figure on all the leading courses, if only because of his fine moustache.

Alphonse was educated to take his place at the head of de Rothschild Frères, and spent time in the other Rothschild houses in Europe, learning his 'trade'. In 1848, he was sent to the United States, from where he sent back enthusiastic reports about the prospects for a Rothschild House in that country. It was not to be. In France, Alphonse felt secure, that 'notwithstanding the many new banking houses, the governments always turn to us'.

There were difficult years. Alphonse led the handling of France's war indemnity in the wake of the Franco-Prussian war of 1870-1871, making it possible for the country to pay off the sum two years early and free France from Prussian troops. Alphonse weathered the anti-Semitic 1890s, in spite of serious physical threats.

Alphonse inherited Ferrières on the death of his father in 1868. Here and at his Paris home on the rue Saint Florentin, he developed his collections of paintings, favouring Dutch and Flemish masters, Rubens, Rembrandt, Frans Hals, and acquiring Vermeer's The Astronomer.

He was one of many members of his family who formed precious collections of Sèvres. In 1885, Alphonse was elected a member of l'Académie des beaux-arts. 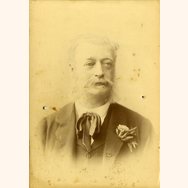