In the 1850s, Salomon was despatched by his father to Frankfurt to serve an apprenticeship in the firm. It was not an enjoyable time for Salomon, although it allowed him to get to know his cousin, Adèle, whom he married on 12 March 1862.

In 1859, he followed in the footsteps of his older brother, Alphonse, and made a tour of the United States, prompting speculation that the Rothschilds were on the verge of establishing their own US house. Salomon was not the man to do it; he was considered by his cousin Constance to be brilliantly gifted, but less addicted to steady work and the habits of business than his brothers and "somewhat dare-devil".

Salomon died in Paris on 13 May 1864 and was buried in the family vault at Père Lachaise. He had been a generous benefactor of several synagogues and a member of the Charity Committee of the Jewish community in Paris. 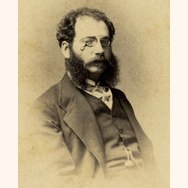