Baron Edmond de Rothschild, the youngest son of James de Rothschild and Betty (née von Rothschild) bore the Hebrew name Benjamin. He was born in the Paris suburb of Boulogne-Billancourt, Hauts-de-Seine, on 19 August 1845. He grew up in the world of the Second French Republic and the Second French Empire, and was a soldier 'Garde Mobile' in the first Franco-Prussian War.

Edmond joined the Paris House in 1868 becoming a director of the Est railway company and other family concerns. He made journeys to Bukharu to examine the potential of the oilfields of the area. In 1877, he married Adelheid von Rothschild (1853-1935) of Naples, the daughter of his cousin Wilhelm Carl von Rothschild. They had three children: James Armand Edmond ('Jimmy') (1878-1957), Maurice Edmond Charles (1881-1957) and Miriam Caroline Alexandrine (1884-1965).

A strong supporter of Zionism, Baron Edmond's most outstanding achievements were involved in responding to the threats facing the Jewish people in Europe in the late 19th century by supporting massive land purchases and underwriting Jewish settlements in Palestine and Israel. Edmond's large donations lent significant support to the movement during its early years, which helped lead to the establishment of the State of Israel. In the 1880s, in his goal for the establishment of a Jewish homeland, Edmond’s philanthropy funded Jewish settlements and encouraged the development of agriculture and industry. 'The Benefactor', as he was known provided support for Jewish colonists, overseeing dozens of new colonies. Rishon le Zion (the First in Zion) was followed by others bearing the names of his parents. Edmond stimulated the economic development of the settlements by investing in new crops, such as wine, grapefruit and avocado, and industrial enterprises such as silk production; he played a key role in Israel's wine industry. Under the supervision of his administrators in Ottoman Palestine, farm colonies and vineyards were established, and two major wineries were opened in Rishon le Zion and Zikhron Ya'akov. Edmond paid his first visit to the colonies in 1887, to inspect the progress that had been made in the first five years. On this first trip, he was accompanied by his wife Adelheid. Edmond's yacht moored at Port Said, then on to Jaffa, before travelling on to Jerusalem.

In 1899, responsibility for the Rothschild settlements was transferred to form the Palestine branch of the Jewish Colonisation Association, which had been founded in 1891 by the Bavarian philanthropist Baron Maurice de Hirsch to help Jews from Russia and Romania to settle in Argentina. Baron de Hirsch died in 1896 and thereafter the JCA began to also assist the Jewish settlement in Palestine. At the end of 1899, Edmond transferred title to his colonies in Palestine plus fifteen million francs to the JCA.

In 1924, the JCA branch dealing with colonies in Palestine was reorganised by Baron Edmond as the Palestine Jewish Colonisation Association (PICA), under the direction of his son, James de Rothschild (1878-1957). PICA acquired more than 125,000 acres (50,586 ha) of land and established a range of business ventures. As well as offices in Palestine, PICA had offices in Paris. After the 1929 Palestine riots PICA helped to rehabilitate agricultural colonies that had been damaged.

When Edmond died in Paris in 1934, he left a legacy which included the reclamation of nearly 500,000 dunams of land and almost 30 settlements. In 1954, his remains and those of his wife Adelheid were brought to rest at Ramat Hanadiv in Zikhron Ya'akov. After Edmond's death, his son James de Rothschild (1878-1957) presided over the affairs of PICA. In his will of 1957, James instructed that PICA should transfer most of its land in Israel to the Jewish National Fund. On December 31, 1958 PICA agreed to vest its right to land holdings in Syria and Lebanon in the State of Israel. Edmond and James' determination to continue to support Israeli institutions was carried out after their deaths by James' widow, Dorothy (1895-1988), who founded Yad Hanadiv. Jacob, 4th Lord Rothschild has followed the family's charitable interests in Israel and is the chairman of Yad Hanadiv, the family foundation which gave the Knesset and the Supreme Court buildings to Israel.

Edmond inherited the family estate Château Boulogne-Billancourt and owned the Château d'Armainvilliers in Gretz-Armainvilliers in the Seine-et-Marne département. Edmond acquired an important collection of drawings and engravings that he bequeathed to the Louvre, consisting of more than 40,000 engravings (including over 100 engravings and drawings by Rembrandt), nearly 3,000 drawings, and 500 illustrated books, A portion of his art collection was bequeathed to his son James and is now part of the collection at Waddesdon Manor.

Edmond had a stong interest in science and founded research institutions such as the Institut Henri Poincaré, the Institut de Biologie physico-chimique, the pre-Centre National de la Recherche Scientifique, the Casa Velázquez in Madrid, and the French Institute in London. He served as a member of the French Académie des Beaux-Arts and through it sponsored the archaeological digs of Charles Simon Clermont-Ganneau in Egypt, Eustache de Lorey in Syria, and Raymond Weill in Palestine.

Edmond died at Château Boulogne-Billancourt in 1934; Adelheid died a year later. They were interred in Père Lachaise Cemetery in Paris until April 1954 when their remains were transported to Israel aboard a naval frigate. At Haifa, the ship was met with sirens and a 19-gun salute. A state funeral was held with former Prime Minister David Ben-Gurion giving the eulogy following which Edmond and Adelheid were re-interred in Ramat Hanadiv Memorial Gardens near the towns of Zichron Ya'akov and Binyamina, both of which he helped found and are named in his honour. Rothschild Boulevard in Tel Aviv is named after him, as well as various localities throughout Israel which he assisted in founding. Also named after him is the Parc Edmond de Rothschild in Boulogne-Billancourt. 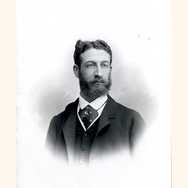