Caroline Julie Anselme von Rothschild known as (Julie) was born in Frankfurt on 2 September 1830. As a young girl, she was judged by some of her relatives to be 'good natured and kind, but not pretty'. Julie married her cousin Adolphe Carl on 16 October 1850. He had a high opinion of her artistic taste, which was drawn particularly to French objets d'art of the 18th century.

Julie held court at her house on the rue de Monceau in Paris and at Pregny, on the shores of Lake Geneva, which was described as one of the most beautiful and artistically appointed homes imaginable. Here, Julie entertained her friend the Empress Elisabeth of Austria the night before her assassination.

Julie was an accomplished artist herself and a keen photographer, building a photographic studio at Pregny in which to pursue her hobby. Her pleasure in smoking large cigars sent ripples of delighted to shock amongst her younger nieces.

After Adolphe's death, Julie withdrew to Pregny, but she took an active interest in the ophthalmological foundation established in Paris by her husband. She died in Pregny on 18 November 1907, making her nephew Maurice her main heir. 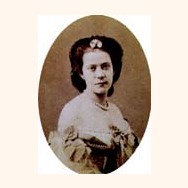