Hannah Mathilde von Rothschild was born in Frankfurt on 5 March 1832, the daughter of Anselm and Charlotte. She  married her cousin Wilhelm Carl in 1849. Her childhood was spent in Vienna and Frankfurt and after her marriage she settled in the latter place, first in a house on the Zeil, having the Grüneburg and then later a house in the small town of Königstein as a summer home. Here she frequently entertained her friend the Empress Friedrich.

A pupil of Chopin, Mathilde developed her love of music as a performer and composer. She produced piano pieces, waltzes and a large number of songs, mainly in French and German, although one English song, My lady sleeps, is known to survive. Her most famous song, Si vous n'avez rien à me dire, the first of five she wrote for Adelina Patti, was recorded in 1905 as La Romance de la Baronne Willy.

Mathilde followed the example of her husband's orthodoxy, and her name was associated with many charitable endeavours in Frankfurt. On her death six institutions were identified as owing their very foundation to her benevolence, and she was a supporter to a great many others. In the 1860s alone she set up three foundations bearing the Rothschild name: an association for artists, in memory of her father; a charity for the relief of poverty; and the Georgine Sara foundation for sick Jews, named after her eldest daughter. 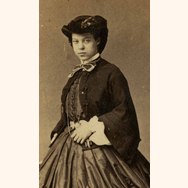